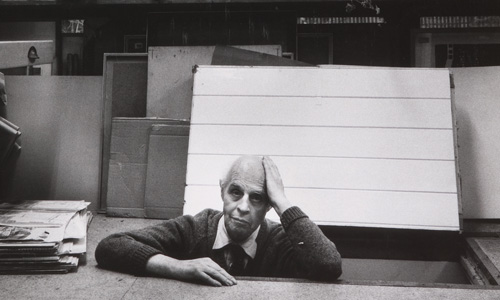 The second exhibition I visited yesterday while at The Higgins Bedford was Edward Bawden and his Studio. I greatly admire the work of Edward Bawden and this exhibition revealed new insights into his personal life that I was unaware of. I love being able to get up close to his prints, to see the marks he carved into lino and the impressive scale of some of the pieces.

The exhibition documents Bawden’s time at three studios in his life – Redcliffe Road, London, which he shared with Eric Ravilious; Brick House, Great Bardfield and Park Lane, Saffron Walden, where he spent the end of his life.

Highlights inlclude ‘The Pagoda, Kew Gardens’ – a very large linocut of the iconic pagoda, an earlier version of which featured on a Transport for London poster; ‘Peacock and Magpie’ – a vibrant colour linocut of an image from Aesop’s Fables and ‘Church and Thunderstorm’ – another large scale linocut of an atmospheric Saffron Walden church struck by a thunderstorm.

Edward Bawden and his Studio runs until 28th January 2018. A brilliant exhibition for admirers of Bawden and for people interested in finding out about him. 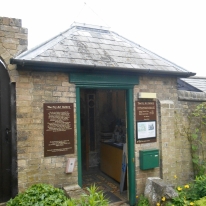 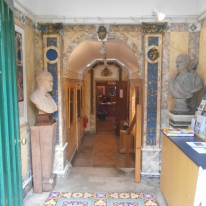 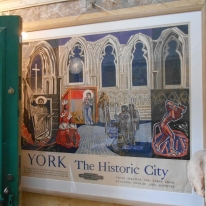 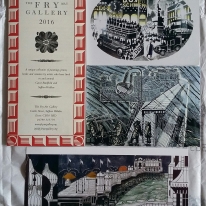 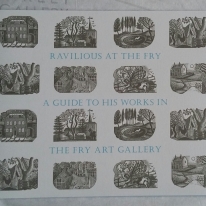 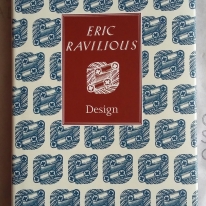 Whilst in Saffron Walden I visited the Fry Art Gallery. It is a brilliant little gallery, which houses original works by Edward Bawden, Eric Ravilious, Michael Rothenstein and Richard Bawden, to name a few.

The main room has a display from the permanent collection called A Modern Sensibility, which features some impressive prints from Edward Bawden and Eric Ravilious. These were the highlights for me, especially Bawden’s Liverpool Street Station and Snowstorm at Brighton. It was also useful being able to compare the print of Brighton Pier at the Fry Art Gallery to the ones I saw earlier in the year at the Bedford Higgins. Another highlight was the set of lithographs by Eric Ravilious detailing life on a submarine. This display is available to view until October.

The second half of the gallery was a special exhibition called Richard Bawden At 80. It featured prints and paintings by Edward Bawden’s son, Richard. I particularly liked the Christmas card designs and the cat chair!

There were also a couple of small rooms, one of which contained other smaller Ravilious and Bawden pieces, including some lovely woodblocks by Ravilious, and a display of book covers by Saffron Walden based collage artist Michelle Thompson.

I was really impressed with the gallery. It has such an important collection of artwork and anyone interested in printmaking should try and visit. The staff were very nice and there are some lovely books available to buy as well! 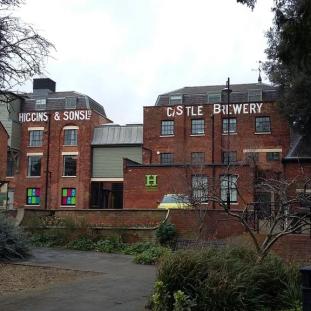 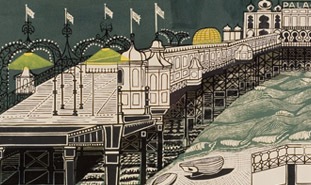 On Saturday I visited The Bedford Higgins, especially to see the Bawden By The Sea exhibition. I had never been to Bedford before, the museum is in an old brewery building and is situated in a pleasant spot near the castle mound and the river (lots of lovely swans on the river!).

I was really looking forward to seeing Bawden By The Sea, especially the original lino blocks for Brighton Pier. The exhibition took you from the initial sketches, to the lino blocks and to the final prints. I loved studying the block in detail and reading about the process. It was refreshing to see that the ‘master’ of linocuts made mistakes and struggled with the process, but still produced excellent prints. There are other sea related etchings and linocuts, including Snowstorm at Brighton, as well as porcelain designed for the Orient Line. There were also other works by Bawden hidden away in vertical drawers and a bench that he designed. I was very impressed and feel lucky to have seen the lino blocks up close.

Aside from the Bawden exhibition, I saw J.M.W. Turner & The Art of Watercolour. There were some great paintings, my favourite being The Great Falls of the Reichenbach, the scale and realism are impressive. This exhibition is joined to another room of watercolours from the museum’s collection and included some very nice works by David Jones and Paul Nash. J.M.W. Turner & The Art of Watercolour runs until 10th April 2016.

The permanent exhibits at the museum are very interesting too, I particularly enjoyed Somewhere In England, which documents Bedford’s agricultural and engineering heritage, and also the display about the history of the brewery.

For anyone interested in printmaking I would definitely recommend visiting Bawden By The Sea! 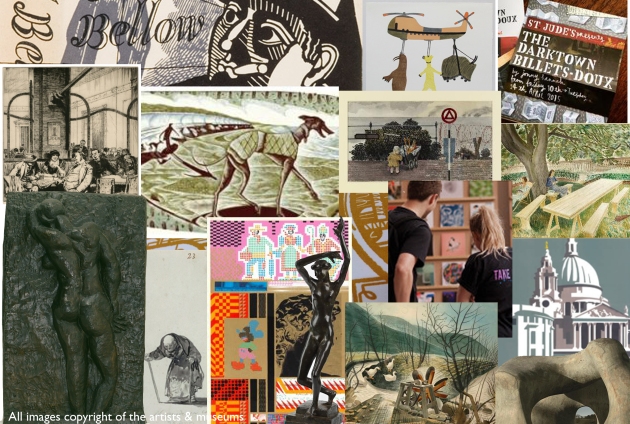 I thought I would make another exhibition wishlist as I have seen so many shows I’d like to go to! I’m fairly sure I won’t get to see half of them, but perhaps you will and you can let me know about it!

Dust: Drew Millward at Colours May Vary, Leeds until 4th May 2015

An Abiding Standard: The Prints of Stanley Anderson at The Royal Academy until 24th May 2015

Goya: The Women and Old Witches Album at The Courtauld Gallery, London until 25th May 2015

Magnificent Obsessions: The Artist as Collector at The Barbican, London until 25th May 2015

New Rhythms: Henri Gaudier-Brzeska and his contemporaries at Kettle’s Yard, Cambridge until 21st June 2015 (accompanied by a display of contemporary drawings in Kettle’s Yard House)

Ravilious at The Dulwich Picture Gallery, London until 31st August 2015

Henry Moore: Back To A Land at The Yorkshire Sculpture Park, Wakefield until 6th September 2015

From Eric Ravilious to Grayson Perry at The Fry Art Gallery, Saffron Walden until 25th October 2015

The Power of Paper: 50 years of printmaking from Australia, Canada and South Africa at The Museum of Archaeology and Anthropology, Cambridge until 6th December 2015

MOONSTRIPS: Eduardo Paolozzi and the printed collage 1965-72 at The Fitzwilliam Museum, Cambridge until 7th June 2015

All images on this site are copyright © 2016 Alyx Hardy. All rights reserved.
Images may not be copied, reproduced, republished, uploaded, posted, transmitted, or distributed in any form without permission.